Fortis – Who Are We?

Fortis started in 1996 and grew out of a concept from 3 SADF veterans. At that stage, farm attacks were on the increase with farm murders becoming an issue fast. A strategic plan was drawn up and implemented in a small area in the Eastern Freestate, with huge success. Military tactics were used to deploy a team into areas to be able to outwit, outsmart and outfight the infiltrating criminals. 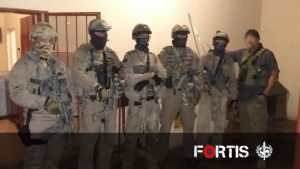 Since inception, a number of Fortis operators have joined the military in countries like the UK, France and USA. Some of these members have returned after successful tours of duty in these armies, to bring back the knowledge and experience into the Fortis teams. Some of our team are still serving, either in a military role or in a civilian role, in hotspots in the world. With the influx of current tactics used in hostile environments the world over, we kept changing and adapting, and always current.

The South African rural area is a slow war brewing on its own, where highly armed groups of criminals will attack families on their farms in the most brutal way thinkable. Planned, surgical attacks aimed at civilians are the order of the day in South Africa.

By studying and living the reality of crime in SA, we successfully combined these 3 elements together – military tactics, crime in SA and the legal aspects of defending oneself as a civilian. We fully recognize the fact that although our basis is and always will be of a military kind, we have to keep adapting specifics to ensure we stay within the law as we defend ourselves successfully in a civilian environment. The ROE’s (rules of engagement) differs from the military arena to the civilian arena. As do many other aspects of attacks.

In 2009 a new phase opened up when we were asked to assist farming communities in training. Farm attacks were still on the rise and communities realised the importance of combating this effectively, as a community and not individuals. Fortis developed training programs focused on communities and neighbourhood groups, with the aim to ensure the community as a whole is trained and empowered to fight the criminal element effectively.

To us, that was and still is, a more pro-active way of combating crime. The last thing you want happening to you is waking up at 2 am with a gun against your head. We need to stop the threat as far away as possible.

Since then we have trained communities all over South Africa, we have also assisted with training and management in anti-poaching operations throughout Africa. We have trained security companies and groups in Africa and Australia.
A third leg was added to our business in late 2010 when we started selling specific equipment. All the equipment we sell are being used by our operators and have been tested extensively on our operations in all scenarios. That is why we can endorse it. We test and check everything we sell to ensure it has a place in your toolbox of self-defence tools.
Fortis has grown to be a well known national and international brand and is hard at the forefront of combating crime. Ever-expanding, ever-growing. Leading from the front, we train, equip, test, advise and attack.
Speak to us for a solution to your problem.